Skip to content
What is “Shawarma”? How Neomonde Introduced this Iconic Dish to North Carolina.

Originating from the Ottoman Empire (roughly modern-day Turkey) in the 18th or 19th century, shawarma, also spelled shawurma or shawerma, meaning “turning” in Arabic, is a Levantine meat preparation, where thin cuts of lamb, chicken, beef, or mixed meats are stacked in a cone-like shape on a vertical rotisserie (it has also taken similar form in the Greek Gyro…though there are a few interesting differences).

Today, shawarma is a staple street food in the Middle East. Traditionally served as a sandwich, it has also grown to become a popular dish in the United States. The Saleh family has always been passionate about being ambassadors of their country’s (Lebanese) cuisine, but there were some obstacles in sharing shawarma with restaurant guests in their North Carolina home when Neomonde first opened its doors over 40 years ago.

The restaurant scene in the US was very different back then. Mediterranean food had not yet gained the popularity it enjoys today, and food regulations were very different. After continuous travels between Lebanon and his new home in North Carolina, Sam Saleh – one of the three founding brothers of Neomonde – wanted to innovate a safe and efficient method for this beloved dish to comply with US food regulations – which would not allow for open rotisseries spits at the time.

“My challenge was,” Sam said, “to capture the essence of the true shawarma, using an alternative method without compromising the taste and texture of the real thing.”

To find an answer, Sam traveled to New York to collaborate with his cousin and fellow restaurateur on the matter. There they developed a new process for preparing and cooking the meat. Rather than placing the meat on a vertical spit, they innovated using a special marinade of traditional spices followed by a “quick-sear” method on the grill.

Celebrating his restaurant’s 40th year and 3rd location in Durham, Sam’s shawarma has always been a favorite at Neomonde Mediterranean. He is particularly happy to have played a part in contributing to the growth of his culture’s cuisine in the United States. 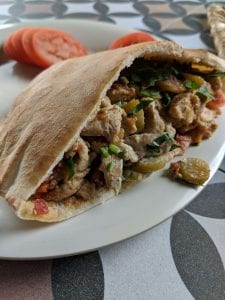